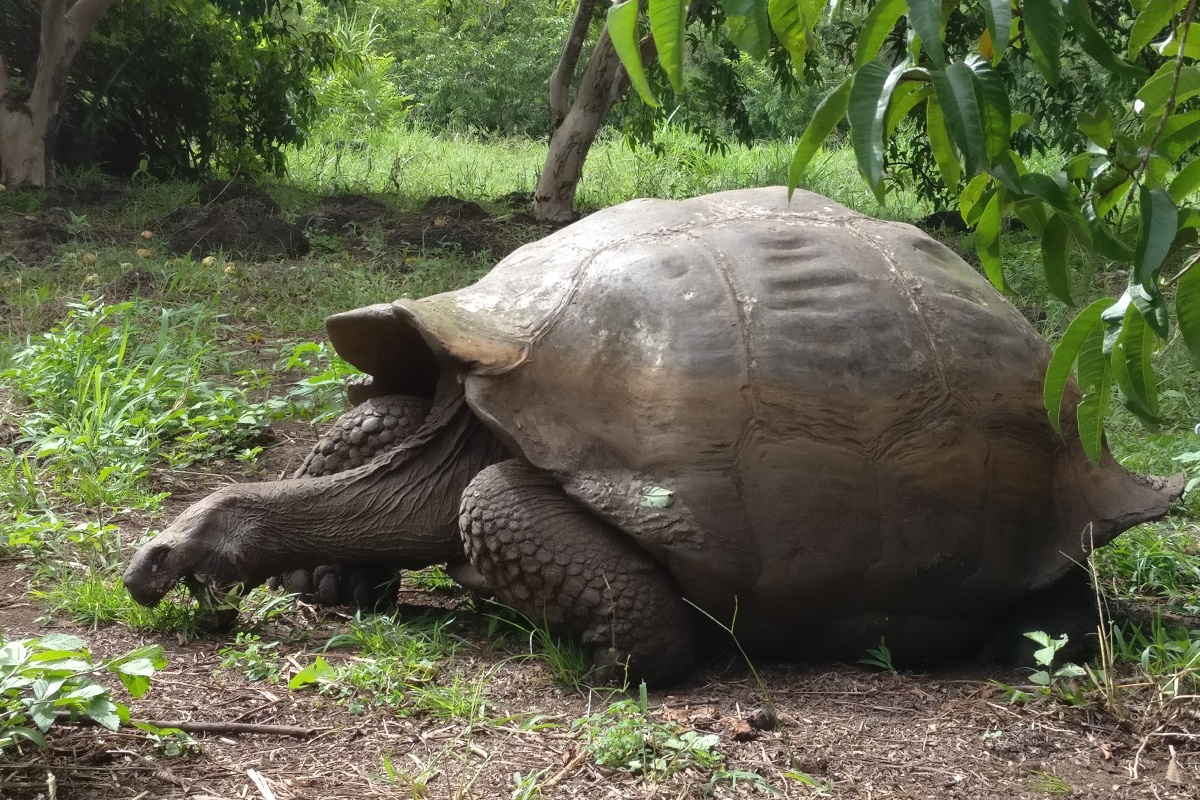 Galapagos, where to start… home to some of the most rare and bizarre creatures on the planet. What an incredible experience.

There are 3 main islands in the Galapagos that you are allowed to visit without a guide; Isabela, Santa Cruz and San Cristobal. We had initially chosen to visit Isabela as it’s the largest, has the smallest population and apparently is less touristy. Unfortunately due to our useless agent (supposedly there to organise everything), we turned up at Isabela and were sent away immediately as the paperwork had not been completed correctly.

Santa Cruz
09.05.17: On arrival we took our first steps on land after 10 days and I must say I didn’t feel wobbly at all! We walked the bustling streets – packed with restaurants, tourist tat shops, pick up trucks and people.

Underwhelmed and disappointed probably best described my feelings… do not fear, this did not last for long!

We got up early, excited for a full day out at Tortuga Bay. After a 30 minute walk, we were faced with row upon row of white crashing waves along a huge sandy beach, perfect.

A spot of surfing was just what the doctor ordered. It was so much fun! I have surfed before in the freezing English summer but this was something else – WARM crystal clear water.

Mark took me to the huge waves at the back, these were a different ball game! After paddling out there, which took lots of effort, I lay on my board waiting for the ‘perfect’ wave… “This one, this one” I questioned Mark on multiple occasions, he wasn’t convinced. Then I saw a ginormous one brewing on the horizon, I knew this was the one. I turned round, got in position and yelled to Mark “this is the oneeeeee” as I got lifted into the air on top of the wave at the speed of lightning. Too scared to make a sound I no longer had control of the board and I definitely did not have my weight in the right position… within seconds I face planted off the front of the wave, went through the washing machine and came out the other side with a war wound… A Fin Chop. Apparently only hard core surfers get them. I paddled back to Mark with a huge grin on my face, which I think was fear, wondering why he didn’t catch it. He looked astounded, “Holy heck, that was a huge dumper!! I wasn’t gonna catch that!”

A Picture Speaks a Thousand Words

11.05.17: We hired bikes, hoping for a gentle ride to visit the Giant Tortoises…. I think we all underestimated the gradient and length of the ride. 40km round trip. Doesn’t sound long but the hills! (Lack of exercise living on a boat definitely didn’t help the situation.) 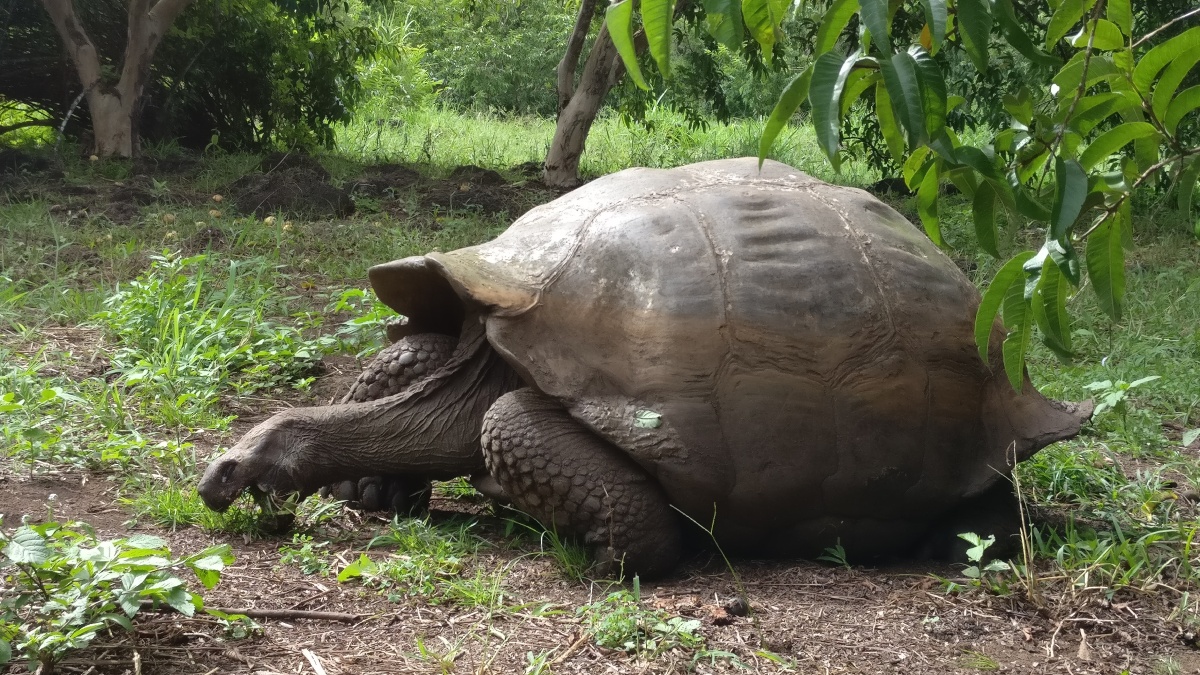 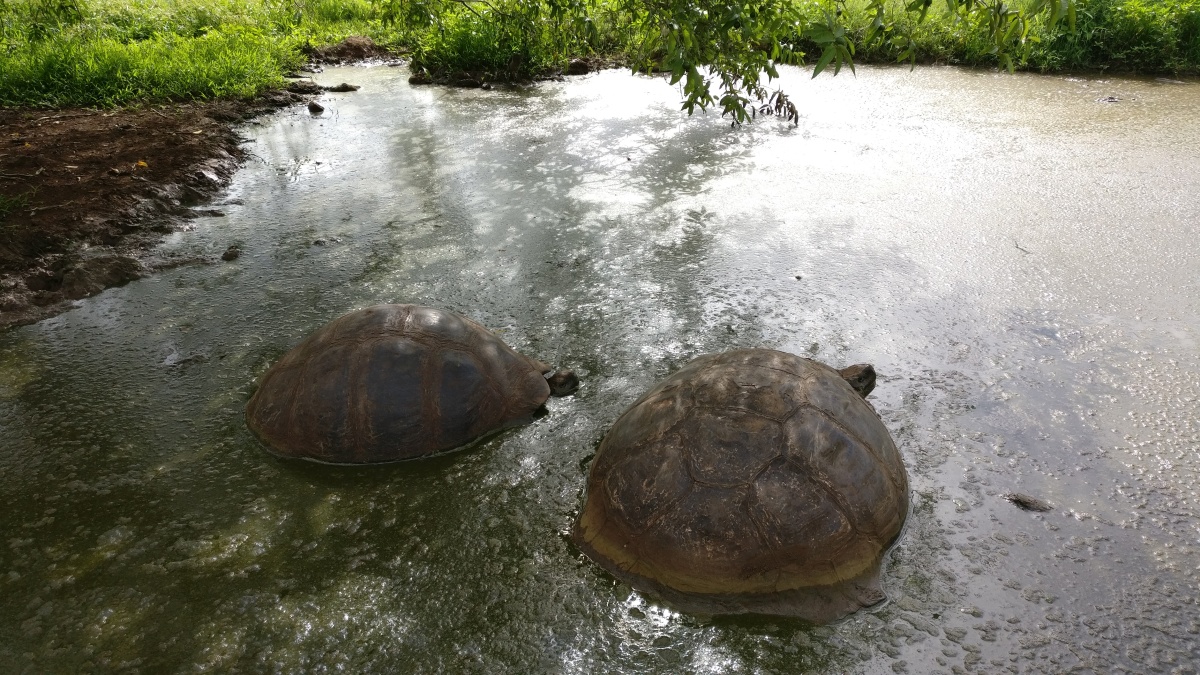 They were also VERY slow… (video below)

I learnt to Scuba Dive at a quarry in the Lake District, in murky water with zero fish and freezing conditions (as you do in England). During one of these dives I experienced cold shock and had to do an emergency ascent. After this I have always been a tad (a lot) apprehensive, yet I had signed up to go Scuba Diving at Kicker Rock and I was shitting myself. Don’t even get me started on the Hammerhead Sharks!!

Then I saw these…

And some more of these…

We saw packs of White Tip sharks, Black Tip Sharks and Galapagos Sharks! They were huge but surprisingly they were scared of us! Incredibly I wasn’t scared at all. Even though we were surrounded by them, I didn’t see a Hammerhead…

The day just got better as we arrived into San Cristobal as the sun set and were welcomed by the sound of…. (Press play and close your eyes – no it is not Spring and you are not in a field in Yorkshire!)

We headed to Isabela, where we initially wanted to go, and yes it was nothing like Santa Cruz. It was a sleepy backpacker joint, no trading except hostels and restaurants. There were no locals busying the town, no hooting of cars, no waving at friends in the street – I realised I’d grown to love the hustle and bustle of Santa Cruz, it had a soul.

We spotted some seal lions playing in the waves. I went in, within seconds I was surrounded by 4 seal lions swirling around me! Twirling with their big black eyes and whiskers. I joined in. Kicking my flippers to keep up with the playful movement. They were so interactive, I can see why they are called the puppies of the sea. I couldn’t get enough of them, wish I had a ball to throw.

After a bumpy introduction to the Galapagos, it all worked out for the best in the end. Things have a way of doing that. Most importantly the wildlife, it blew me away. I came away from Galapagos with a real appreciation for nature, land and sea creatures. Every landscape has its creatures. I never thought I’d go on a bike ride and cycle past a Giant Tortoise! A world away from squashed roadkill rabbits and getting stuck in a cow jams in Yorkshire. Scuba Diving at Kicker Rock was definitely a highlight of my time in Galapagos – if you face your fears, the rewards are even greater.